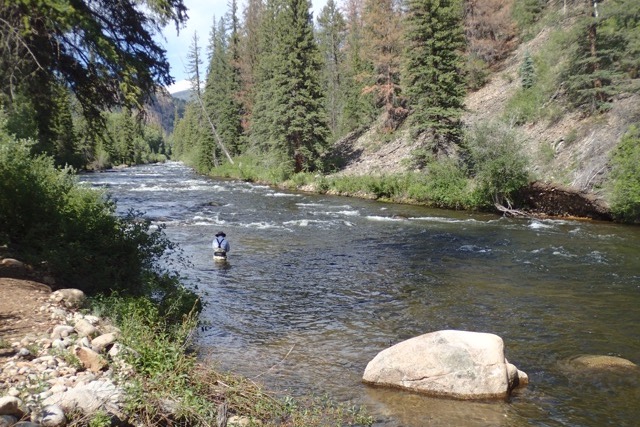 It’s been a while since my last Taylor River fishing report and lots has happened in a short time. Our high spring flows have dropped to the 600 CFS level on the Taylor and while still a bit on the higher than normal side, the dry fly fishing is on fire. I have been waiting for flow predictions from the Taylor Dam and have been expecting an updated release report for the last 10 days, however, it appears that after way underestimating the spring run off and releasing around 300% more water than estimated, the water authorities are being slow to publicize more predictions. I would say that over the next 3 weeks we’ll see the river drop to the 500 CFS range and more water become fishable as the flows reach that level. Water temps are optimal in the 49-52 degree range and should warm up slightly through August. 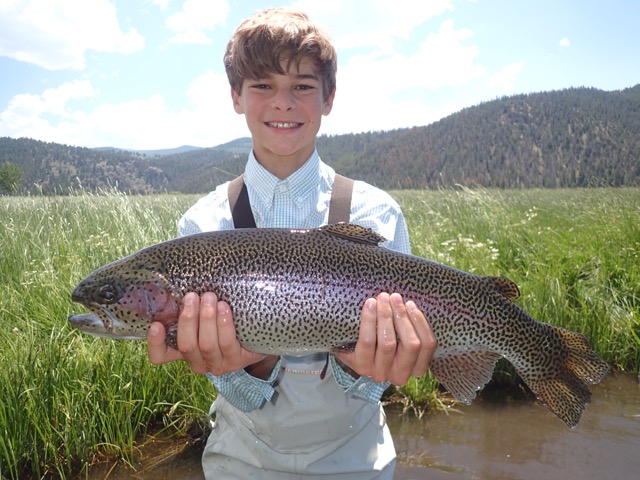 Right now the dry fly fishing at Wilder is nothing short of amazing. Taylor River fishing is as good as it gets! Almost any well presented dry fly can produce right now. Stoneflies, Green Drakes, PMD’s and BWO’s are consistently hatching and bringing up fish during mid day. Caddis are hatching and laying eggs on the water during all daylight hours. Fish are gorging both on the surface and subsurface on this bounty of insects. In the past few days we have caught many fish on large Stonefly imitations: Caddis, Para Adams, Green Drake, PMD and BWO patterns. Peak hatch time for the Mayflies is 1 pm. Best time to be on the water is 11-3 p.m. Cloudy days are best, rain is better and during the peak of a good hatch you will be astounded at the amount of fish you see rising. If you see fish rising and they are not responding to a large dry, try a #16- 20 BWO parachute. Despite all the big bugs around, this pattern can produce more consistently than any other we have found on this stretch of the Taylor River.

Hatches here seem to come in waves. Bugs and fish will be everywhere, then they can disappear quickly. It is not uncommon to have 2 to 3 waves of bugs during an afternoon. When you no longer see fish rising, try adding a small dropper on 6x to your dry. We have been fishing well with a variety of bead or tung head caddis larva imitations and psycho mays in a #20. 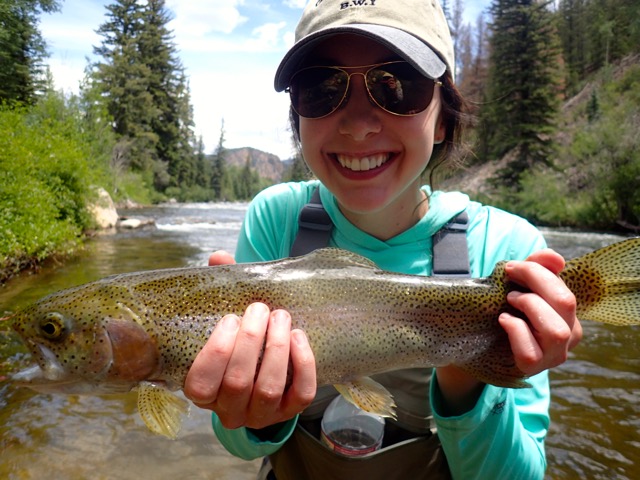 A great technique for Taylor River fishing this time of year is to skate your dry fly. If dead drifting your dry is unsuccessful, try some light skates by doing mini mends throughout the drift. Today most of the fish we caught on dries responded to the twitched fly better than the dead drift. This can work with Caddis, Stonefly and Mayfly imitations. In the right pools you can start by fishing upstream with a dead drift and as you move up, try reach casting out to the sides or slightly downstream and doing a series of mini mends to twitch up a nice fish. A long light greased leader and a well dressed fly will help keep your dry on the surface when you do this.

Evenings can be consistently good fishing Caddis imitations in sizes 14-20. Around 7 -7:30 on certain evenings the river can explode with both Caddis and rising fish. These moments are unpredictable but it is always worth being on the water at this hour as there are always a few fish looking up. As evening approaches darkness, if you are still on the water, you might consider a very large dry such as a George Harvey Moth fly, giant Stimulator or Mouse. This is the time of day when big fish are on the prowl. Right now is the best dry fly fishing of the year so I hope you all have a chance to get out there and enjoy some fun and rewarding fishing. 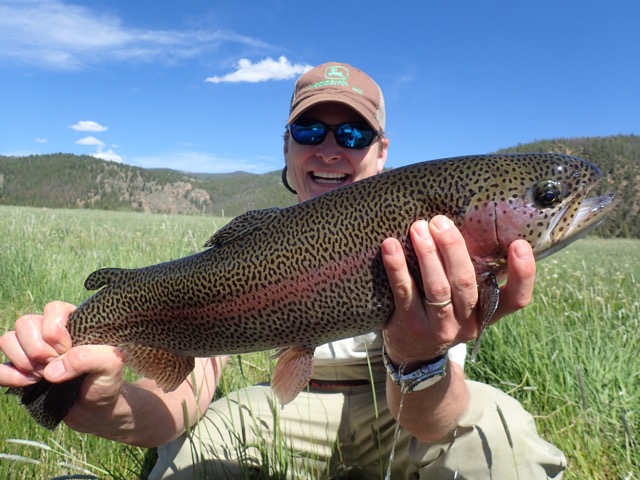 The Dream Stream has consistently been producing HUGE Rainbows all season long as well as large numbers of 8-17 inch Browns and Brookies with the occasional Cutthroat. Today we landed a Rainbow of about 7 lbs on a dry and several in the 4-5 lb range were also carefully released. Mornings can start out slow with fish acting lethargically and uninterested in most fly patterns. At this time a #12 Para Adams with a #20 Psycho May dropper can be effective. Fish carefully and slowly because around 11 a.m. the fish seem to wake up and start eating. Caddis and BWO’s will start hatching at this time and you will see fish rising and eating emergers just under the surface. Extra stealth is required for this kind of fishing. Stepping slowly and quietly, casting lightly on the water and using extra long leaders of up to 12 feet will all increase your  odds of hooking a trophy trout here. Although I generally advocate light tippets for many reasons, on the stream, due to the size of the fish and the rocks they can cut your line on, I recommend a minimum of 4X.

Remember that on each pool your best odds are on the first cast so take your time and make that first cast count. I like to make my first few casts with a dry only and if that fails I may add a small dropper and try again. Search the water effectively and look for little spots and currents that may hold big fish. It will surprise you some of the water that we catch the biggest fish in.

As of today, the fish started responding to large Hopper patterns such as a #8 Madame X or Para Hopper. Hopper fishing is best once the day warms up a bit and the Hoppers get active. Best yet is a windy afternoon when errant fliers wind up in the stream to eagerly awaiting trout. For these large patterns I prefer a 9’ 3x leader. If the big dry proves ineffective you can always add a dropper. If you come to a deep hole and are looking at several large fish close by, a San Juan Worm can often do the trick if other droppers fail.

If you hook a large Rainbow on the stream you may have your hands full as they will try to wrap around and get underneath every rock in the water. Landing one of these fish can be sporty and maneuvering the line around the rocks by changing the direction of pull and being light on your feet can make the difference. 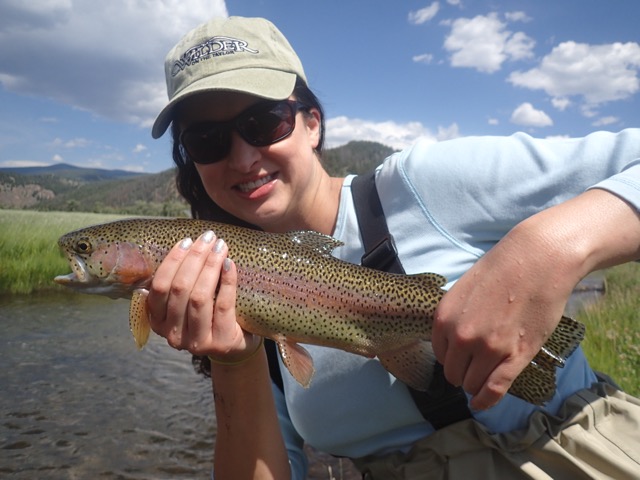 Large fish can take a long time to land and it is very important to resuscitate the fish completely before walking off and continuing fishing. Best is always not to remove the fish from the water. If you opt for a quick photo, hold the fish, snap a quick shot and return the fish to fast clean water. Hold it gently there, head upstream until it recovers and can hold it’s own in the current and swims off freely. Watch him carefully after you let him go as he might go belly up which will necessitate further resuscitation. If this happens re-capture the fish and give him some more time in the well oxygenated water. I have spent over 15 minutes reviving some fish and had them swim away.

The Wilder ponds all have healthy populations of Browns and Rainbows. When the water is calm and still, they can be difficult to catch. Most of the fish are keyed in on damselfly nymphs and dries and cruise the shore in very shallow water to eat. These fish are super spooky and a long well placed cast is usually needed to fool them. Sight fishing in calm conditions can be effective with Damselfly dries and nymphs, small nymphs and dries fished on 9’ 4x leaders. On windy days throwing a Hopper pattern can trigger strikes from some monsters.

Wherever you fish at the Wilder right now, you have a chance at landing that fish of a lifetime on a dry fly. Concentrate on stealthy presentations and good drifts and the rewards will come.

Wilder on the Taylor River offers a unique opportunity to own private fly-fishing property along with a beautiful riverfront home. Click the links to learn more.