Winter Wonder at Wilder on the Taylor

The heartbeat of the ranch is the Sabrowski family who have lived at Wilder for 20 years and raised their family here.  They manage the entire ranching operation at Wilder which includes the historic hay and cattle operations that have been the center point of the Taylor canyon for over 110 years.  They also provide a turn-key operation for the owners at Wilder. In this letter from Shelly, she shares why she enjoys the changing of the seasons and the excitement that wintertime at Wilder brings.

Winter brings a slower pace for our family along with breathtaking beauty and the challenges snow can bring. 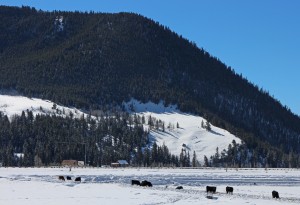 By this time of the year, all of the cattle are off of the high summer pastures and are making the snow covered hay meadows their home. Their routine consists of our son Clay coming out to feed them every afternoon as soon as the school bus drops him off. He drives the John Deere 4230 with the round bale feeder out to a swarm of hungry cattle in the middle of the west hay meadow. He is pushed and nudged by wet cold noses of the “pet” cows we have. He obligingly scratches cows #19, #8, #10, the black baldy cow, and too many others to name. With experience beyond his years, he cuts the strings on the round bale, hops up in the cab and begins feeding a nice row of hay. On the weekends, he plows the snow into wide rows so the cows can eat on solid ground.

All of the hay stacked high in hay shed is almost gone from Don selling it to local horse owners. He has quite a number of local buyers who even go so far to call in June asking him to save hay for them to buy once it’s baled. 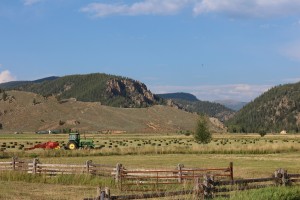 Wilder’s native Timothy hay is also sought after by the National Western Stock Show (NWSS) held in Denver every January. For the past three years, Don has sold them three semi-loads of hay. This is the only source of hay they sell to all of the horse and livestock exhibitors who come from every state to show their animals. The cherry on the top is both of our sons, Calvin and Clay, have the opportunity to go with the hay and offload it each year. It takes about two days to accomplish this feat, and they both have a lot of pride since they are the ones who harvest it. As soon as the first semi rolls in, lines of people form waiting to buy it. (Calvin pictured harvesting the hay in August) 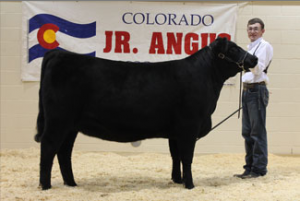 A couple of weeks after stacking all that hay at the NWSS, we head back to Denver so the boys can show their Angus breeding heifers against some of the best cattle in the country. Last year, Calvin placed fifth in both his breeding class and open class with his heifer, Chevelle. At first Calvin was disappointed until the breeder we bought her from told him he placed very well considering the heifer who won his classes was bought for $180,000 and the second place heifer went for $80,000. He was shocked! It’s called the Super Bowl of livestock shows for good reason. It takes lots of hours washing, working their hair, exercising and practicing setting up to show. Every day they are able to, the boys spend four hours working their show cattle.

With the snow on the ground and weekly storms bringing in more, we also see changes in the wildlife migration and changes in the Taylor River. By early December, I start looking for elk migrating from the south side of the ranch heading to the Almont Triangle. Jack’s Cabin Cut-Off is closed for the season to allow the elk a place to eat and calve in peace. This wintertime at Wilder, we didn’t get our first snow until later so that delayed the migration but when they came, they did not disappoint us. This year was really special because for the last month, there have been 250+ bulls, cows and yearling elk hanging with the cattle in the west hay meadow. They come and go, but it’s quite a sight even for us.

It was especially exciting for one of our homeowners who came to Wilder to celebrate Christmas on the ranch. They had family in who never had seen elk before. It was neat for me to hear how much they enjoyed seeing not only elk for the first time, but that many at once. 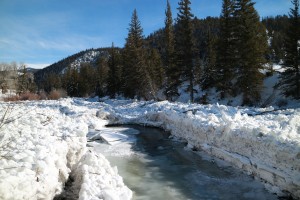 We had another exciting event take place on the Taylor River. On New Year’s Day an ice floe occurred to the magnitude by which we had never seen before. It began as an ice dam in the river above Rosie Lane Campground. As the water freezes and thaws, it builds layers of ice. When the conditions are just right, the dam breaks and the sudden flow of water flushes ice down river. We have seen this happen every year that we have lived here. What made this one different was the sheer amount of ice and water coming all at once. Calvin was able to witness dozens of Bald Eagles swarming over the ice, picking up fish that had surged on top of the flow. What a sight to see! 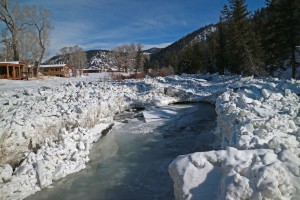 I go down every few days to see if any of the ice that backed-up has melted or shifted. The river has made a channel through the ice and still runs underneath. The ice creaks, moans and sometimes pops. I could stand there for hours watching and waiting amazed at this sight.

The best thing about living at Wilder is nothing ever stays the same. The seasons change, our jobs change accommodating the seasons, and I get to watch my boys grow up right before my eyes. I truly feel blessed calling Wilder my home.